When Gustav Holst penned his best known orchestral work The Planets in 1913, astronomy was a new and emerging field. So emergent, in fact, that little was known about the planetary bodies at the center of the work – their atmospheres, specific orbital patterns, surfaces, environments – beyond the fact that they existed as spheres (or dots, depending on your observing tool) in the night sky.   Holst’s musical interpretations of each planet were instead based on the Greek or Roman gods that shared their name. What’s remarkable is how much Holst, who never saw a high-resolution of any of the planets in his lifetime, got right in his musical rendering.   The dissonance and boldness of “Mars, Bringer of War” is well-suited to the stark and unforgiving landscapes of the planet’s vermillion surface. The majesty of “Saturn” sounds as if it were written specifically with the seemingly endless expanse of icy rings in mind. The tranquil tones of Neptune’s scherzo complement a bright blue planet floating peacefully, suspended in stark blackness, at the edge of our solar system. Dreamy, effervescent melodies speak of the beauty and brightness of Venus, but belie an inhospitable and toxic surface that was unknown to Holst.

In the ensuing decades since The Planets debuted, advancements in telescopic observing as well as the advent of the space age have made it possible to observe planets close-up using satellites, space-based telescopes, and landers. The science of these missions has provided a wealth of images and information about the planets to inform Holst’s celestial tour.   It was initially the idea of the Houston Symphony Orchestra to first pair images and videos from NASA’s 50+ year history of planetary science missions with Holst’s music. Houston is also home to Johnson Space Center (NASA’s crew training and space operations field center), perhaps best known as the location of mission control.  This weekend, the Nashville Symphony tackled The Planets, accompanied (as in the Houston performance) with high definition imagery from NASA.

The videos and images showcased here come from a diverse array of flyby, orbiter, and lander missions from the 1960s to the recent present. The scale and breadth of NASA’s exploration initiatives in this span is nothing short of staggering. Mariner, Pioneer, Magellan, and Galileo reveal the dense cloud cover of Venus; the more recent 2004 Messenger mission shows the rocky, barren surface of atmosphere-less Mercury; the Mariner, Viking, Pathfinder, Odyssey, Spirit, Opportunity, and Curiosity missions reveal the dramatic canyons, valleys, and polar icecaps of Mars; Voyager and Pioneer capture the turbulent storms of Jupiter; Cassini and Voyager tell us of Saturn’s cloud patterns, vortices, moons, and rings; Voyager, still the world’s farthest reaching humanmade object, provides the images of the most distant worlds, gas giants Uranus and Neptune. It is here that Holst’s galactic tour ends. Pluto was not discovered by Clyde Tombaugh until 1930 and has recently (sadly) been demoted from its planet status.

While each segment of The Planets is awe-inspiring in its own right, “Mars, Bringer of War” is the dramatic standout. From the first clash of percussion and the red sphere rising ominously in the background to the animation of Curiosity’s entry, descent and landing, the visuals and music never deviate from less than perfect synergy. Neptune’s accompaniment also serves as a fitting end to our planetary journey, as the voices of an all women’s choir, hidden from the stage, gradually fade into nothingness.

Holst omitted earth from his symphonic tour. To Holst, earth was merely the jumping off point, the start of the story of exploration. But somewhere buried in the calvacade of images of Saturn, you can see us. We’re little more than a speck, a “pale blue dot” in the phrasing of Carl Sagan, visible only if you know what you’re looking for amid the spectrum of color. The image was Sagan’s idea –as Voyager I departed Saturn for the far reaches of the solar system, Sagan suggested the spacecraft turn and take a look back. It’s said that astronomy is the most humbling of fields. When you look at us through the cosmic lens, you realize we are but a blip in time and space. In the words of Neil Armstrong, reflecting on his own otherworldy voyage, “It suddenly struck me that that tiny pea, pretty and blue, was the Earth. I put up my thumb and shut one eye, and my thumb blotted out the planet Earth. I didn’t feel like a giant. I felt very, very small.” 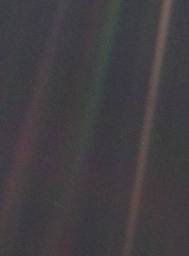 The famous Pale Blue Dot image taken by Voyager I.

The Planets will provide you with a renewed sense of our place in the universe, but it also calls upon us to marvel at our seemingly indomitable spirit for exploration in the face of great odds. Over the course of 40 years, the surface of Mars has become somewhat of a minefield of failed orbiters and landers.  Our collective human spaceflight endeavors also have no shortage of tragedies.   In spite of these losses, dreams of spaceflight and our call to the greatest of human adventures persist.

Space has long served as a source of inspiration for musicians, from Johann Strauss and his “Music of the Spheres” to David Bowie’s “Starman.” Stanley Kubrick, who initially commissioned an original score for 2001, ultimately found the musical outcome of his composer’s efforts unsatisfactory, choosing instead to accompany his space epic with the strains of Strauss and Wagner.

The Planets is a beautiful union of art and science in this grand tradition.   After all, isn’t space majestic enough to merit its own soundtrack? The bar is set very high though – it’s hard to imagine a better accompaniment for our star-filled voyages than Holst.

Disclaimer: This writing was prepared in my personal capacity.  The opinions expressed are my own and do not reflect the view of any other organization I am affiliated with or employed by.