As we head into movie awards season (it’s my Superbowl and as an added bonus, no one’s at risk of CTE), here’s a quick rundown of some films I hope will be remembered when it’s finally time to hand out gold statuettes (and a couple of others best forgotten).

Wonder Woman.   “It’s all fun and games until the men show up” is essentially the moral of Patti Jenkins’ stellar 21st century imagining of the Wonder Woman franchise.  While I’m a bit too young to remember Lynda Carter and her invisible plane (which isn’t anywhere to be seen in this retelling),  I found this entry into the Marvel comics pantheon a refreshing respite from the barrage of hypermasculine superhero movies we’re seemingly bombarded with every summer. Wonder Woman is a lot of kitschy fun (in a delightful reversal of gender roles, there’s Chris Pine essentially playing the role of “the girlfriend” in every comic book ever here), but the film really soars when it transitions from a primitive Greek island to 1940s era London.  Gadot as the titular character is nothing short of a superstar and proof that women can successfully headline major Hollywood action blockbusters.   It makes me happy to think that for many little girls and boys, the first comic book movie (and superhero) they’ll see is this one.  If you haven’t gotten around to it, get thee to a Redbox.

Spiderman: Homecoming breaks all the rules of comic book movies and offers up a fresh and new entry in what I had previously written off as an aging, tired franchise.  I walked into this film expecting an origin story.  I was prepared to watch Peter Parker’s uncle die, Peter being bitten by a mutant spider, Peter awkwardly discovering his powers, and then Peter falling in teenage love with Mary Jane.  None of that happens in this film.  Instead, we’re dropped into Peter’s high school life (and existence as a teenage superhero) in media res.  Peter at this point is already Spiderman.  He’s stopping crime, living with his aunt (the delightful Marissa Tomei), and dominating high school quiz bowl.  There are scenes in this movie that perfectly evoke the high school experience in a manner we’ve not seen on screen since John Hughes.  The story arc is fairly conventional, but the movie is strongly anchored by relative newcomer Tom Holland in a starmaking turn.   Holland is completely believable as a teenager, quickly erasing my memory of Andrew Garfield’s crow’s feet moonlighting in this very role just a few years ago. 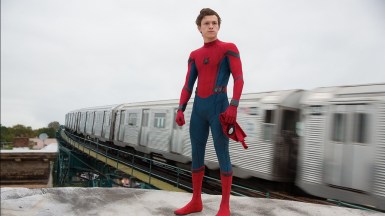 The Big Sick is an emotional roller coaster of a romantic comedy that tells the true-life story of Kumail Nanjiani (of HBO’s Silicon Valley) and Emily V. Gordon, his co-writer and now wife.  Kumail and Emily meet, briefly date, break up (in part due to cultural differences which the film deftly examines), and then are reunited when Kumail is asked to see Emily through an unexpected medical crisis.  I had no idea Holly Hunter was in this film prior to seeing it, so I was ecstatic when I heard her thick Georgia drawl make its first audible appearance as Emily’s hilarious and at times heartbreaking mother (my borderline obsession with Holly Hunter as a spirit animal/role model is a subject for another blog).  Seriously though, this is the movie that will make your cold, hardened heart believe in love again.

The Beguiled.  The trajectory of Colin Farrell’s career from twentysomething matinee idol (remember when I was a proud owner of The Recruit on DVD in college?) to indie darling has been a fascinating ride.  In The Beguiled, he’s an injured civil war soldier encroaching on the idyllic girl’s school/plantation home run by Kirsten Dunst and Nicole Kidman (here with a breathy Southern accent).  Filmed on a Louisiana plantation and directed by Sofia Coppola, the film is deeply atmospheric and suspenseful.  At a scant and tightly plotted 90 minutes, Coppola regales us with a Southern Gothic take on lust, revenge, and 19th century war.  I would recommend watching this one in a double feature alongside Wonder Woman, then rinsing your film palette with The Big Sick to remind yourself the vast majority of men aren’t out to wreck your life.

Colossal.  Colossal is a fun, inventive take on the classic Asian monster movie, with Jason Sudeikis and Anne Hathaway starring as adults who can mysteriously channel their anger into robots attacking Seoul (yeah, you read that right).   The film straddles deep social commentary and monster movie fluff nicely.  Sudeikis and Hathaway are strongly cast against type here and the film is a sci-fi romp that doesn’t shy away from critical examination of its complicated and (almost) unlikeable characters.

Guardians of the Galaxy, Volume 2.  Let me preface this by saying that I loved the first Guardians of the Galaxy movie.  I had high expectations for volume 2 (perhaps too high) and while the movie is still watchable, it feels like somewhat of a muddled mess compared to its predecessor.  The film opens strongly, with the ageless (thanks to computer imaging) Kurt Russell jamming to what I too feel is one of the strongest entries in the universe’s musical catalog, “Brandy (You’re A Fine Girl)” by Looking Glass.  Despite cleverly weaving the lyrics of “Brandy” into one of the film’s subplots, the second entry in the franchise quickly begins to feel formulaic: there’s extended battle scenes to Yacht Rock, Chris Pratt being Chris Pratt, and witty Guardian banter.  These elements are what made the first film memorable, but there’s something about their resurgence here that just feels off.  My advice is to skip this one unless you’re a fan, download the soundtrack, and put Looking Glass on repeat.  There’s a port, on a western bay….

It is the rarest of the rare in the annual calvacade of fall horror films: an old-fashioned scary movie that feels like a cross between Stranger Things, Stand by Me, and (weirdly) Pretty in Pink.  There are a few technical missteps here that take away from the film – some of the camera work borders on nausea inducing (turns out those classic canted camera angles are best left to Hitchcock) and the editing occasionally misses opportunities to take advantage of the story’s momentum. But with good character development, well-timed comic relief, and real monsters (of both the human and nonhuman variety), this stands as a surprisingly strong entry in the long line of Stephen King film adaptations.

“Who invited Molly Ringwald?”  The kids in It have ’80s movie heart.

There’s little in theaters this year that feels as relevant to our social media obsessed culture as Brad’s Status, a quirky independent film starring Ben Stiller and Jenna Fischer as the California parents of a gifted musician applying to schools on the east coast.  Brad’s Status isn’t a strong enough entry to be remembered come awards season, but its message about the insecurities we breed by comparing ourselves to others is one all viewers can take to heart. I always find endings of the “lady or the tiger” variety frustrating and the lack of resolution here is my singular complaint about this otherwise charming film.

Five Foot Two is a documentary chronicling Lady Gaga’s preparation for the Superbowl halftime show and her struggles with fibromyalgia that feels like a two hour extended cut of MTV’s Diary.  Skip it unless you’re a diehard fan (or have two hours to kill on a weeknight with your Netflix streaming subscription, which is my current situation).

Preview of movies I’m looking forward to as we kick off awards season:

“You’re in a desert, walking along in the sand, when all of a sudden…”  I CAN’T EVEN.

Battle of the Sexes.  It’s Billie Jean King vs. Bobbie Riggs in mainstream cinema’s look at Title IX and the 70s feminist movement.

Current Wars.  Michael Shannon, Benedict Cumberbatch, and Nicholas Holt face off as Westinghouse, Edison, and Tesla, respectively.  Best zinger from the trailer: “I fix the mistakes of idiots.” #TEAMTESLA